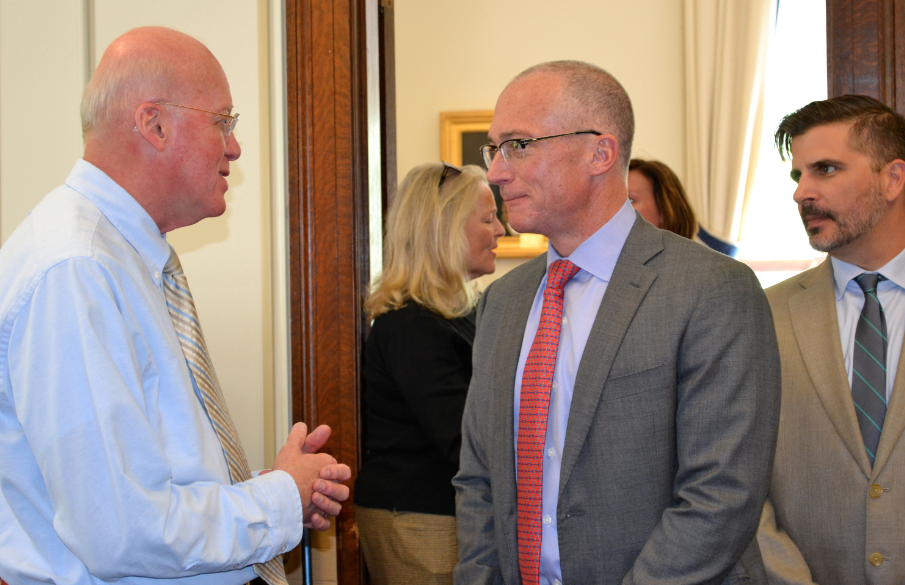 CONCORD — With only a few strokes of a pen, Dan Innis made his run for Congress official on a sunny afternoon in June a small move with big potential.

"It's all very quiet, like it's a solemn moment," he joked as he filled out his form in the New Hampshire Secretary of State's Concord office.

His husband, Doug Paladry, and his two sons, Benjamin and Nicholas, stood behind him along with nearly a dozen other supporters of all ages.

"It's an honor you're all here," Innis said. "It's going to be a spirited campaign to bring a more positive difference in DC."

Innis made the announcement of his intent to run back in October, 2013, though rumors of him running had been floating around the state months beforehand. Since the fall, he has been campaigning around the state, in his opinion making this move not unlike the rest.

"I guess this is an important day," he said, modestly shrugging when asked how it felt to make the campaign official.

Before and during these last ten months, Innis has served as the Dean of UNH's Peter T. Paul College of Business and Economics, a position he has held since 2007. Though he confirms that he is now officially on leave, he said he enjoyed his work at the university and was glad to have helped everyone get settled in the new building.

If elected, Innis, who is running as a Republican, says that he plans on using his background in education and business to help better address the employment and economic needs of the average American, a more than fitting platform. Besides working at UNH, he and his husband owned the Ale House Inn in Portsmouth for four years and currently own the The Hotel Portsmouth, which opened in April, 2014.

He plans to pay attention to many of the other hot topics issues currently being debated in Washington.

"Obamacare is a major issue, it's still a recurring theme when I'm out campaigning," he said.

For him, his favorite part of campaigning has been working and talking with New Hampshire citizens. It is this focus and understanding of the common man that he believes sets him apart from other candidates.

"Everyone says that they really enjoy meeting people," he explained. "But for me, the Q and A's with different people has been fascinating and a great learning experience.

"There are a lot of people (in the U.S. government) with a background in politics," he added. "We need folks down there down who are coming from the citizenry."

This year's Congressional elections are set for Tuesday, November 4. Innis will be running for District 1 Congressional seat against Frank Guinta, another Republican, and the current mayor of Manchester, who served in the NH House of Representatives for the District from 2011 until 2013. Both hope to replace Carol Shea-Porter, the Democrat who has held the chair since 2012.​

From Around the Web

MOST POPULAR THE NEW HAMPSHIRE NEWS

Beat boredom and explore the region By Greg Laudani

FROM AROUND THE WEB